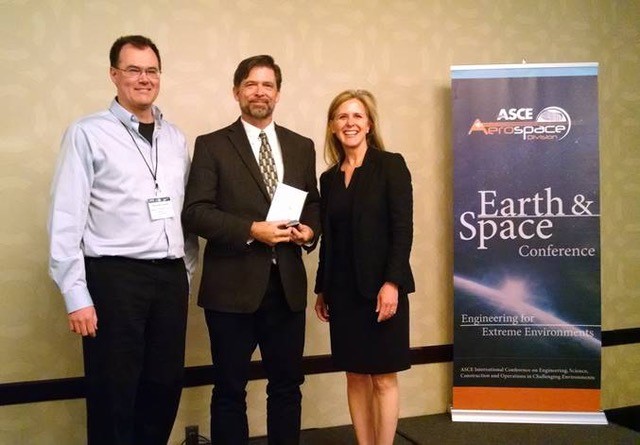 Philip Metzger, a planetary scientist in UCF’s Florida Space Institute, has won the Outstanding Technical Contribution Award for 2016 from the Aerospace Division of the American Society of Civil Engineers (ASCE).

The award was presented to Dr. Metzger at a banquet on April 12, 2018, during Earth & Space 2018, the 16th Biennial ASCE International Conference on Engineering, Science, Construction and Operations in Challenging Environments, held in Cleveland, OH.

The Outstanding Technical Contribution Award was established in 1999 to recognize one individual yearly “who has contributed substantially to advancing the state of the art in aerospace engineering, sciences and technology, and space exploration and construction with application to civil engineering.”

The ASCE works to advance civil engineering in space because the Moon, Mars and asteroids are becoming extensions of human civilization, so everything civil engineers do on Earth they will need to do off-Earth. There are already efforts to license a commercial habitation on the Moon’s surface, to mine asteroids, and to build rockets for use by human settlers to Mars. Efforts are now underway to extend the best practices of engineering civilization on Earth into these new environments.

Dr. Metzger is the chair of the ASCE Technical Committee for Regolith Operations, Mobility and Robotics. He has contributed to civil engineering in space by organizing and leading a series of biennial workshops since 2003 on “Granular Materials in Space Exploration”, which focuses on the physics, geology, and engineering mechanics of extraterrestrial soils. This includes landing spacecraft and driving vehicles on regolith, using it as a construction material, mining and extracting resources from it, and studying it for scientific knowledge. He develops technologies to work with lunar, asteroid, and Martian soil including work with Honeybee Robotics on small prospecting spacecraft that mine water then hop using steam propulsion, with Deep Space Industries on 3D printing methods for structures built from asteroid and Martian clay, with the United Launch Alliance and Colorado School of Mines on thermal extraction of lunar ice, and with NASA on lunar soil mechanics testers for use by gloved astronauts. He is part of the UCF team developing and characterizing asteroid regolith simulants for NASA. He develops computer modeling and experimental methods to study the geological state of lunar soil in the Moon’s polar regions and lunar mining. He was a principle contributor to NASA’s efforts to protect the Apollo sites on the Moon from the sandblasting damage of visiting spacecraft, and he has contributed to the physics of rocket exhaust blowing soil on extraterrestrial bodies. 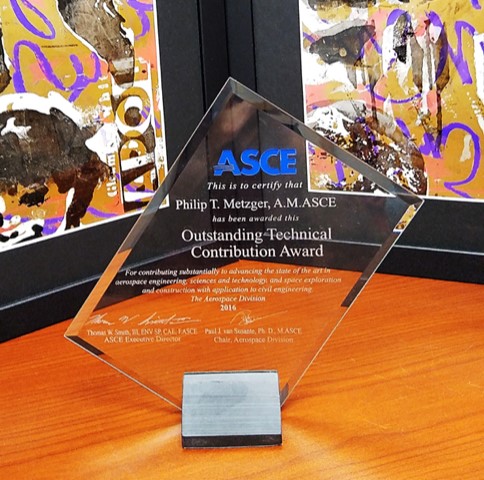