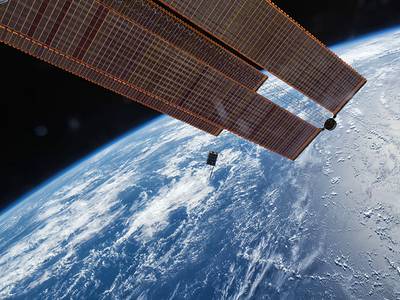 As part of a series of microgravity experiments to investigate the transitions between sticking, bouncing and fragmentation of colliding dust aggregates, the Suborbital Particle and Aggregation Experiment-2 (SPACE-2) is scheduled to fly on the Exos Aerospace SARGE vehicle in early 2019, gathering more dust collision data as well as testing components for an upcoming CubeSat experiment (Q-PACE).

SPACE-2 will fly on the SARGE vehicle of Exos Aerospace Systems & Technologies in early 2018. The ballistic apogee of the SARGE flight trajectory is at around 100 km, providing for exposure to a near-space environment and a microgravity phase of about 90 s at 10-4 g levels. During this time, we will perform a three-phase experiment run, sequentially releasing the reservoir particles into the experiment chamber, and ramping the shaking speed up and down to monitor the multi-particle system response to a range of accelerations.

The objective of the SPACE-2 experiment is the extension of the data collection started with SPACE, which flew on the Rocket Experiments for University Students 12 (REXUS 12) in 2012, to a wider range of particle sizes and compositions. SPACE-2 will investigate the influence of a size distribution as well as the presence of fine dust on the collision behavior of multi-particle systems.

In addition, SPACE-2 will allow for the testing of experiment hardware for the upcoming CubeSat Particle Aggregation and Collision Experiment (Q-PACE), a 3U CubeSat due to launch for Low-Earth Orbit (LEO) in Q2 2019. SPACE-2 is testing the experiment chamber and camera system of Q-PACE in the environmental conditions of space (low pressure and temperature, microgravity). During the rocket flight, we will be able to perform a functionality test on the particle injection mechanism (reservoir rotation using either a motor or a solenoid), the shaking mechanism (solenoids and levers), and measure the optimal experiment parameters for the long term CubeSat flight (shaking frequency, number of particles for each size).